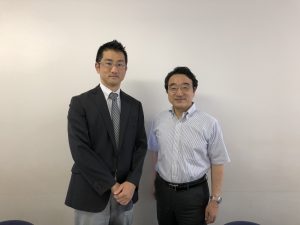 We interviewed Profssor. Naohito Ohno of Tokyo University of Pharmacy and Life Sciences, who has for many years conducted joint research on King Agaricus (Brazilian outdoor grown, strain KA21). Prof. Ohno’s laboratory has presented on the effect of King Agaricus on tumors and fungal infections in many academic meetings and papers.

First of all, could you please tell us about your research outcomes on King Agaricus?

I have been studying King Agaricus from when it first began to attract attention, and I have more than 20 years of achievement. My research outcomes have been presented at both Japanese and international academic conferences, including the Annual Meeting of the Pharmaceutical Society of Japan, the International Congress of Immunology, and the International Medicinal Mushroom Conference. To date, I have published 26 international papers on the safety and efficacy of King Agaricus (as of August 2018).

The features of King Agaricus

Generally speaking, the components of Agaricus vary widely according to its strain, where it is produced, and the conditions under which it is cultivated.

We had Japan Food Research Laboratories conduct a component analysis on King Agaricus cultivated in outdoor conditions in Brazil (strain KA21). We found that it contained high levels of protein, dietary fiber, Vitamins B1, B2, B6, niacin, pantothenic acid, folic acid, biotin, and minerals, such as iron, potassium, phosphorus, magnesium, zinc, copper, manganese, and selenium. 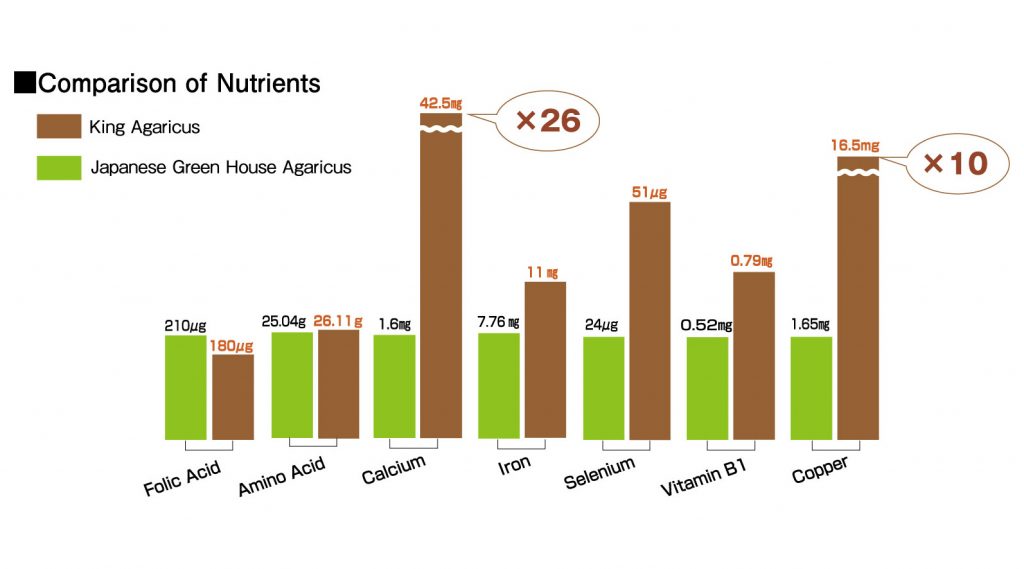 Compared to ordinary, indoor-grown Agaricus, King Agaricus grown in the open air in sunlight is far larger. We also found that it contains 1.5 times the beta glucan and more Vitamin D compared to indoor-grown counterparts. 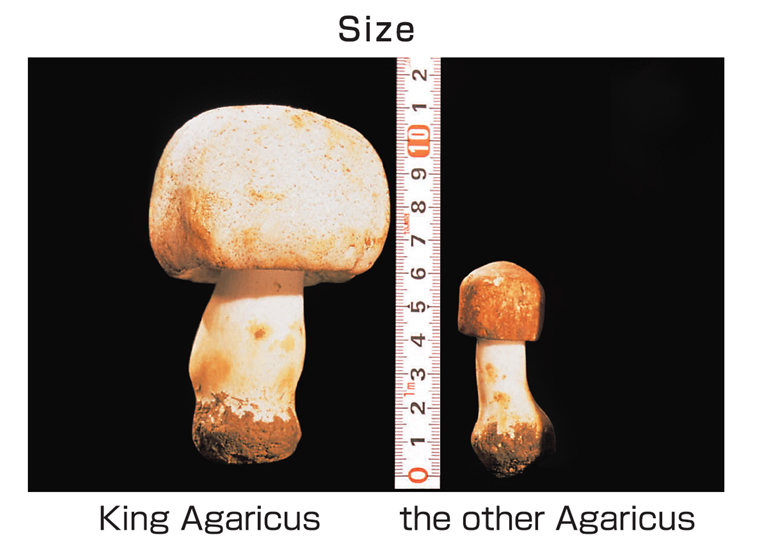 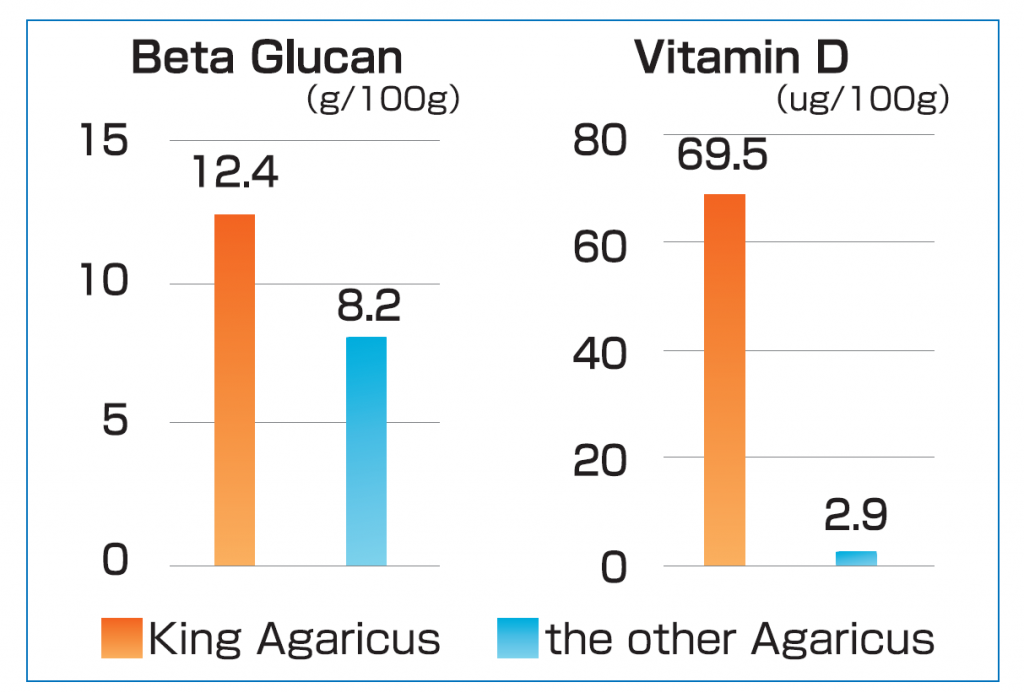 Results also showed that anti-oxidative activity is also 2 to 4 times more potent than indoor-grown Agaricus (produced in Japan and Brazil). 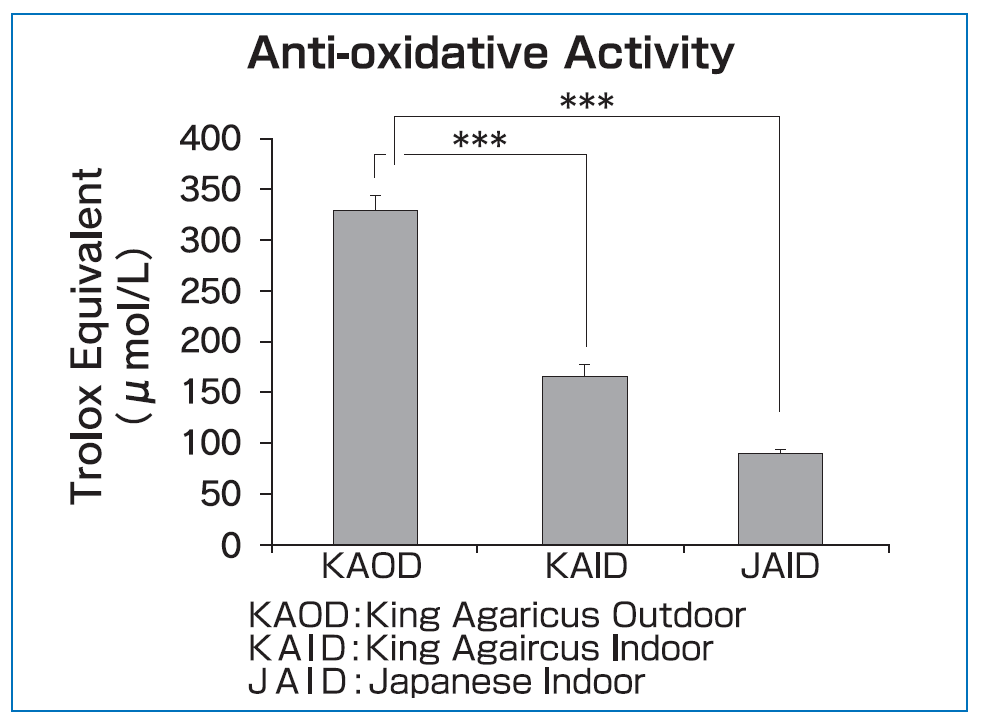 The safety of King Agaricus

Residual pesticide and heavy metal screening have shown King Agaricus to be safe. No residual pesticides were detected, and heavy metals were lower than limit values. Tests on mice, and clinical studies in humans studying long-term (6 months) ingestion of 3 to 6 times the usual quantity, also demonstrated the safety of Agaricus.

To date, we have published the following research outcomes:

Q. Please tell us about the mechanism of how Agaricus boosts immunity.

First of all, Agaricus and other mushrooms are not vegetables. They are fungi, like molds.

The fruite body doesn’t look like mold, but when you see a photo of the mycelium, you can see that it looks exactly like Trichophyton, which is the mold that causes athlete’s foot. 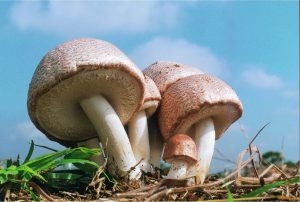 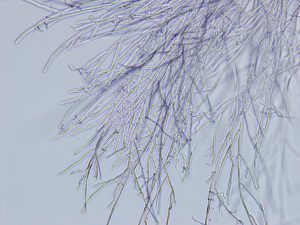 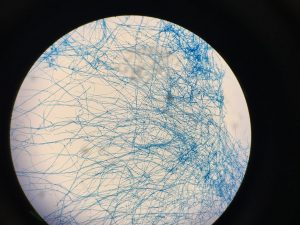 Molds can be beneficial or harmful to humans. One beneficial mold is koji (Aspergillus oryzae), which is used to brew sake. Some examples of harmful molds are Trichophyton which causes athlete’s foot, Candida albicans which can inflame mucous membranes, and Malassezia which can result in Malassezia dermatitis or otitis externa.

All of these fungi, including mushrooms and molds, contain the component beta glucan in their cell walls.

Beta glucan can take a variety of forms (chemical formulas) depending on the variety of mushroom or mold.

You will notice here that the beta glucan of Agaricus is very similar in structure to that of Candida, which is a pathogenic fungus.

Now then, what happens when you ingest this beta glucan?

(please see the cartoon below.) 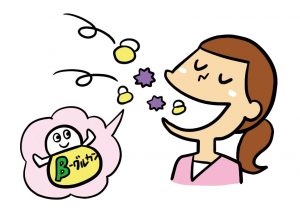 Unlike other nutrients like vitamins and minerals, beta glucan remains almost entirely undigested until it reaches the intestinal tract.

In the intestinal tract, meanwhile, immune cells (macrophages, etc.) are always on the ready for foreign invaders (pathogens, etc.). 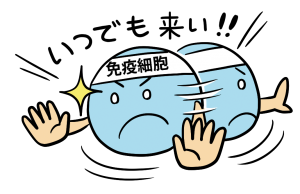 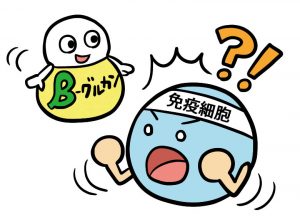 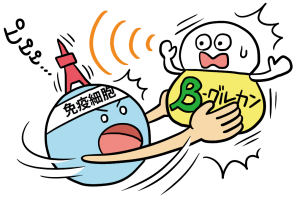 And the immune cells are activated to protect the body against foreign invaders. 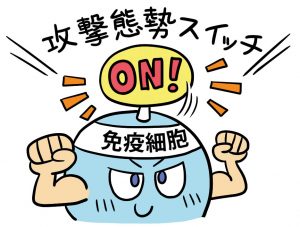 As a result, the immune cells of the entire body, not just the intestinal tract, are activated. They attack pathogens which enter the body as well as foreign bodies generated within the body = cancer cells. 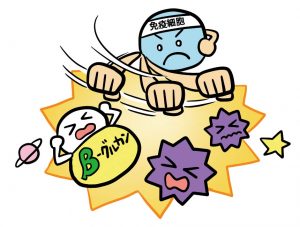 A slightly more academic explanation of what I just described would be:

The beta 1,3 glucan in Agaricus bonds with Dectin 1, the macrophage and dendritic cells receptors, causing the release of substances like IL12 and IFN-gamma from dendritic cells etc. and the activation of a variety of immune cells. 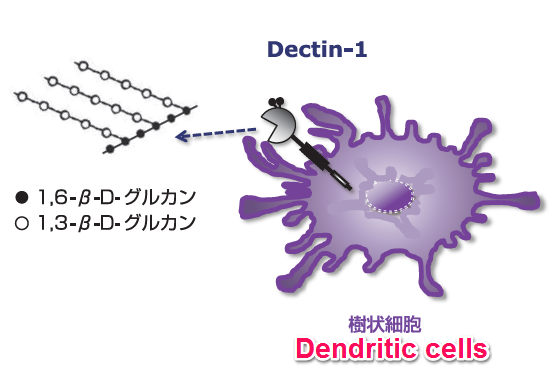 While other supplements exert their effect by being absorbed into the body, the beta glucan of Agaricus is believed to exert its effect not by absorption but by stimulating the body’s immune cells.

Agaricus is believed to be effective on tumors and infections because of this unique mechanism of immune system activation.

The effect of Agaricus

In regard to immune system activation, we conducted research relating to its effect on tumors and fungal infections (beta glucan antibody titer).

We examined mice given subcutaneous injection of sarcoma in the inguinal region to identify which of the components in Agaricus has an antitumor effect. We made a point of giving the Agaricus orally, as this is the usual mode of ingestion in real life. Our results indicated a 47% tumor size reduction in the group given hot water extract of Agaricus (mainly containing the beta glucan mentioned in the previous passages). 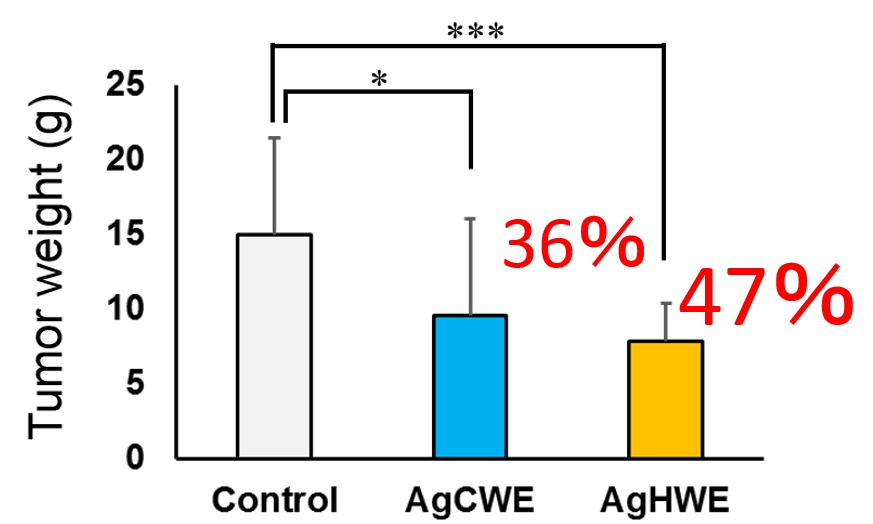 We have already seen how ingesting Agaricus can stimulate the immune system and protect against infections. There is particular promise for fungal infections.

As outlined above, the structure of the beta glucan in Agaricus is very similar to those of Candida and other pathogenic fungi (Malassezia, Trichophyton, Aspergillus, etc.). 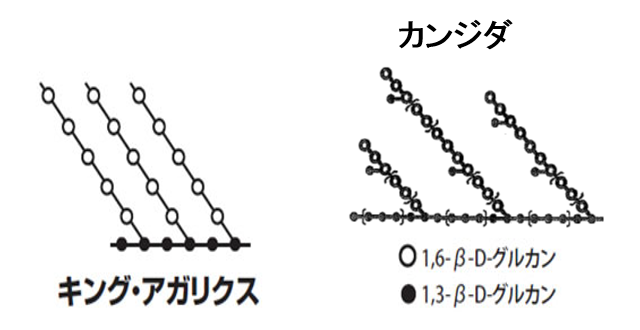 For this reason, when antibody titer for Agaricus beta glucan is elevated, there is likely to be cross-reactivity against these pathogenic fungi, leading to stronger resistance.

In fact, it has already been shown in human clinical settings that the ingestion of Agaricus leads to fungus-derived beta glucan antibody titer elevation (especially IgA antibody titer associated with mucosa immunity), suggesting the likelihood of elevated immunity against a variety of pathogenic fungi as well. 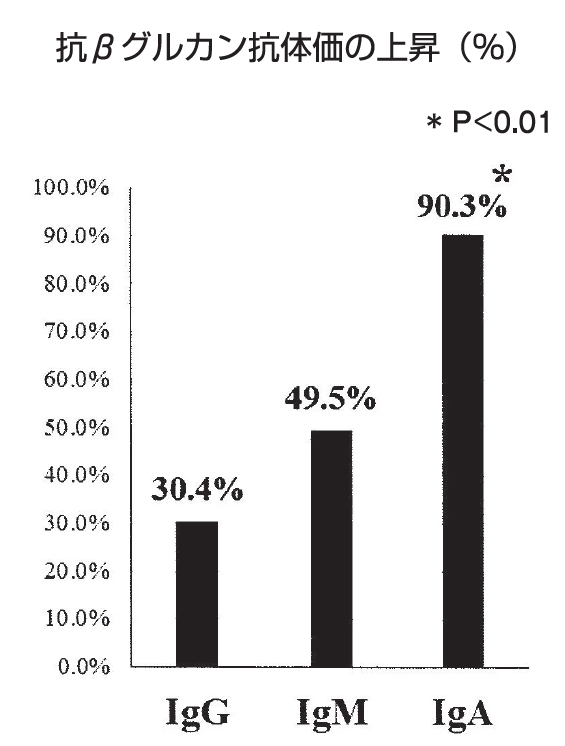 Elevation of beta glucan antibody titer as mucosal immune response suggests efficacy in preventing such conditions as immune system decline and oral thrush (oral candidiasis) due to long-term steroid use or immune-related diseases.

In addition to clinical results in humans, we have conducted joint studies with Azabu University School of Veterinary Medicine on the serum of dogs, cows, pigs, monkeys, goats, rabbits, guinea pigs, turkeys, and chickens, and determined immune response of IgG antibody titer elevation, which suggests efficacy against fungal infections in a wide range of animals. 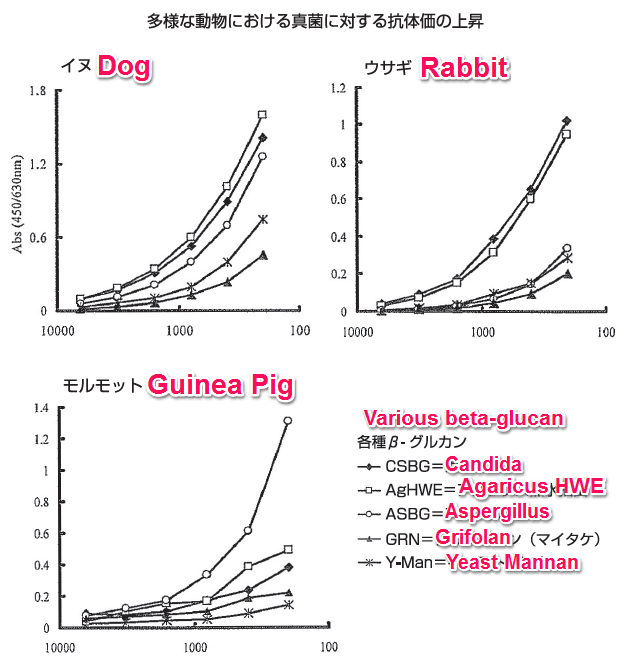 Specifically, the following applications may be possible.

(Other fungal infections in Human)

In both cases, we hear of the conditions often becoming intractable due to dogs resisting topical ointments or licking them off.

Because Agaricus is ingested, it holds promise of enhancing antibody titer from within the body, suggesting the likelihood of a positive effect when given in combination with conventional modes of treatment.

Protection of the liver is another beneficial effect which has been observed.

We allowed mice free access to food containing 3% to 10% control, indoor grown Agaricus, or outdoor grown Agaricus for 10 days. We then performed intraperitoneal injection of carbon tetrachloride (1%) and tested their serum and liver tissue taken 24 hours after the injection. Our results indicated a significant improvement in liver function parameters in the outdoor grown Agaricus group(KAOD-10%), while inflammation could not be controlled in the groups given indoor Agaricus or control. 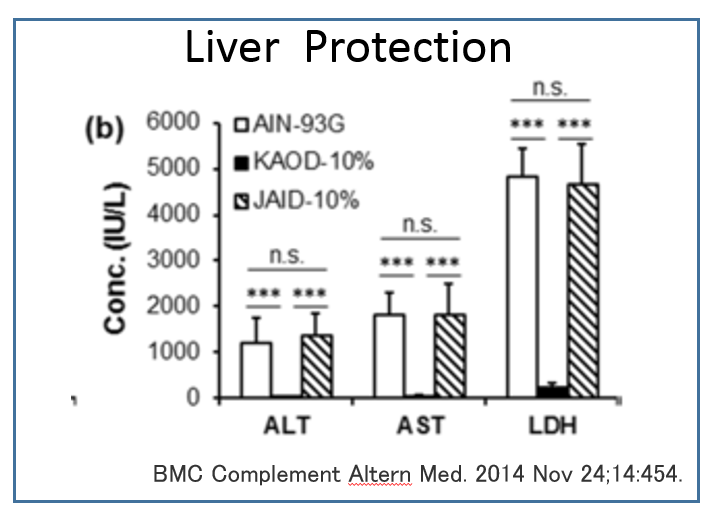 The difference between indoor and outdoor grown Agaricus is believed to be due to the difference in antioxidant activity.

These results suggest efficacy in animals (including human) with liver disease or abnormal liver function tests.

What kinds of disorders can Agaricus benefit? (In summary)

Q. Please tell us about any precautions we should take when using this material in the clinical setting.

King Agaricus is classified solely as a food. It is likely to boost the immune system and protect the liver as a tertiary function of food. It is not a pharmaceutical product, so there are no detailed conditions as to its ingestion, such as interaction with other foods and drugs. There have been few studies examining tertiary function of foods in animals, so I would be interested in receiving questions from doctors as well as information on interesting results, so that I may accumulate the data.

1.『Antitumor β-Glucan from the Cultured Fruit Body of Agaricus blazei』